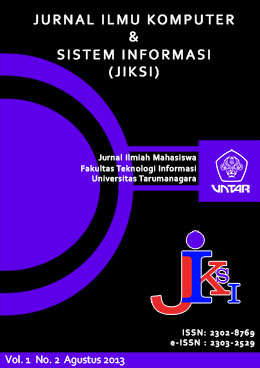 The application of student’s itinerary consists of two main part. The first part is recommendation. The recommendation uses bayesian belief networks to classify whether a student might pass or not if they took a certain course. The recommendation will give an alternative itinerary about information regarding which courses, lecturers, and classes to take. This is possible by mining data from previous students with similiar academic achievements. The last but not least part is detection. The function of detection is to detect which students are likely to drop out. This is done by calculating the average total points accumulated for each passing courses, then comparing it with provision of minimum accumulated points from the Faculty of Information Technology. The detection also involves calculation of the average accumulated points terms and comparation whether the students might graduate within the time limit based on the provision. The recommendation using bayesian belief networks proves to be useful by getting 91,24 % accuracy. The high accuracy is likely supported by considerate preprocessing methods and the relationship of each attribute from bayesian belief networks. The detection part is able to detect which students are likely to drop out, for the marked students are students that had drop out before and had a bad academic achievements.