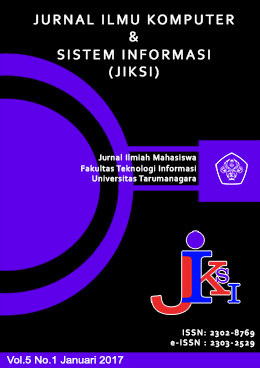 The potential of tourism in Indonesia is vast and sometimes forgotten by the Indonesian society for the less visited location by the tourist. The potential that exists will be supported by this Jajak Indonesi’s Portal.This time, the case study is Lasem City which relatively far from big cities, making this Lasem City sometimes forgotten by the society, both public society and broad society. From the description above,that it will be built a system that has a goal to be able to provide clear and complete information to facilitate the tourists in order to access information on tourism in Indonesia by using the website and Google Maps. And also increasing the promotion that was inadequate or that used to print media only.The method used in collecting data is through interviews with those who have direct observation to Lasem City and collect information in the form of secondary data. In the process of making a program to integrate database, the MySQL is used with PhpMyAdmin tools. At the user and admin display, using tools like PHP, CSS, HTML, and JavaScript. The programming language is supported bt the Dream Weaver CC 2015